I’ve hit a wall.  With unpacking, that is.  I’ve been in my new apartment for several weeks now and I had planned to have everything unpacked, sorted and either put away in it’s rightful place, or packed into my basement storage unit.  But I’ve hit a wall and there are still boxes here and there, waiting to be unpacked.  Each time I walk by one, I sigh and promise to get to them later.  But “later” has yet to arrive and so they sit, silent and accusing.

And so I needed a little pick me up.  And rather than just sucking it up and finishing the unpacking, I made scones.  Because, really, scones are so much better than unpacking boxes.  And the process is much more fun.  Scones are similar to a biscuit and are often served as part of a breakfast or brunch, but you would never slather a scone in gravy; they’re just fancier, somehow – more dignified.  And since I was wanting a little dignity in my life (those unpacked boxes sitting around really aren’t very dignified), an afternoon snack of chocolate chip scone and tea seemed appropriate. 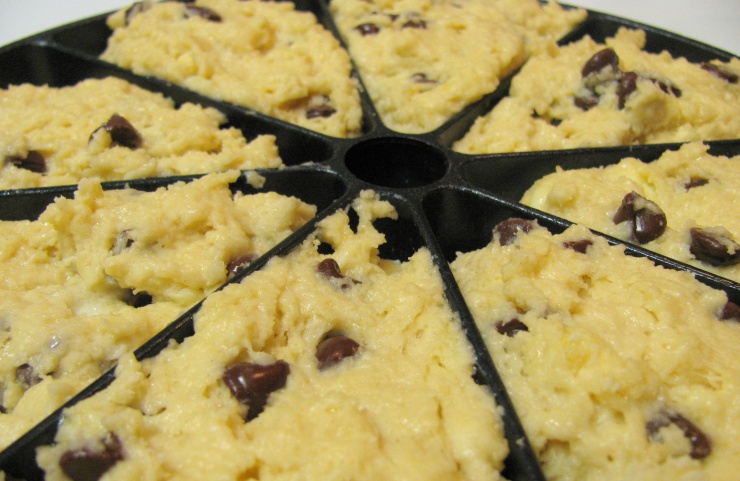 Since I cook in a kitchen just wide enough for one person to turn around in, I try not to have a lot of one-use kitchen items lying around and taking up space.  However, while you could make drop scones on a cookie sheet, I like the wedges that my scone pan provides.  I suppose, however that the pan could also be used for cornbread and other types of baked items, but since I prefer making cornbread in muffin tins, I’ve only ever used it for scones.  I just think the wedges look a little bit more professional and classier than a scone just lumped on a cookie sheet.

And I’m all about the fancy.

Preheat the oven to 425 degrees and lightly grease the scone pan.

In a large mixing bowl, mix together the flour, sugar, salt and baking powder.  Cut in the butter until the mixture is crumbly.  Stir in the chocolate chips and set aside.

In a separate bowl, whisk together the eggs, vanilla extract and milk.

Make a well in the middle of the dry ingredients and add the egg mixture to this.  Stir the two together until it’s moistened and holds together.  It’s going to be a very thick batter, so don’t worry if it seems “too thick.”  Add a tablespoon more milk if needed to moisten all the flour.

Using a spoon, scoop the mixture evenly into each wedge of the scone pan and bake in a preheated 425 degree oven for 15 to 18 minutes, or until the tops are lightly browned.  Let them cool for several minutes before you remove them from the pan.  Serve them warm or at room temperature.