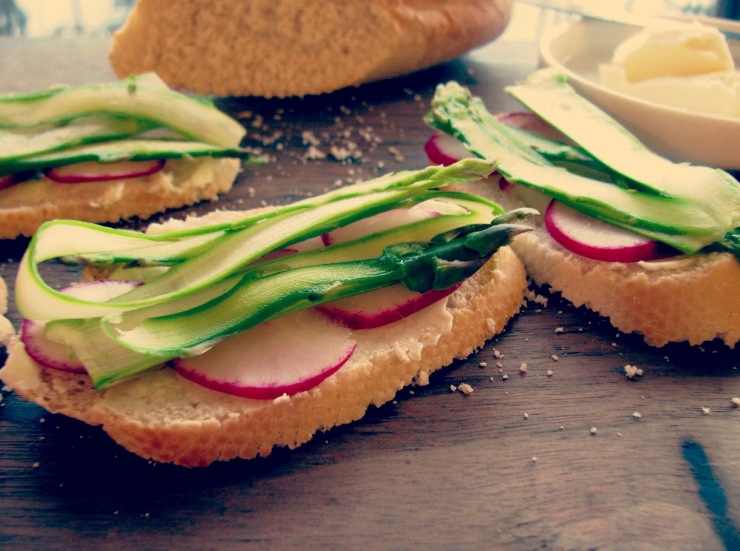 Spring in Kansas is always a whirlwind.  When it’s not sunny and fresh, it’s humid and drizzly.  And when it’s neither sunny nor drizzling rain, the skies are a dire shade of stone grey, quickly filing with so many ominous clouds one can hear the faint threads of a dirge being piped in from some hidden place.

And, this being Kansas, it can be all three in one day.  Or 30 degrees one day and 80 the next.  Save for hurricanes and tsunamis, we get everything: blizzards, sizzling sun, and while the earthquakes might be pint sized, the tornadoes aren’t.

There’s a reason meteorologists love to live here.  And the main reason rode in last night and early this morning on a freight train.  Tornadoes.

After living through my first tornado (one of the worst ever in Kansas: the infamous 1991 Andover F5), I tend to get a little nervous when the news and weather forecasters call for “tornado outbreaks.”

I start thinking about what I would take with me.  If my entire house was to be destroyed, all my belongings swept away, what would be left?  Which material things would I rush to save?  Would it be family pictures?  Keepsakes and antiques?  Electronics like my laptop, hard drives, camera?  Would I think to grab some clothes?  What about water or food?  Books I treasure and memories in the smallest objects?  Important documents and identifiers?

There’s a website I visit every so often when I’m feeling particularly maudlin.  It’s a pictorial of items people would bring with them if their house was burning.  Some bring practical items, but most choose sentimental things.

I used to wonder, what would I bring.

And now I know.

In a fit of paranoid anxiety, my Friday night consisted of packing into one large reusable shopping bag: changes of clothes, toiletries, ID documents, electronics, medicines, both prescription and over the counter, memories from Uganda, cat toys, food, treats, and her vaccination record, and the cat, always.

It surprised me what I didn’t pack.  My collection of penguin figurines, which I’ve always loved, didn’t make the cut.  Nothing from the kitchen.  No falling-apart baby blanket.  No family heirlooms or antiques.

I’ve always been a chronic over packer.  And I suppose the fact that I packed a bag (in advance) at all is a sign that I’m still not over that particular quirk.  However, I always thought of myself as more sentimental – that I’d have trouble leaving things behind.  And when i think about it now, I’d be devastated if many of the things I didn’t pack were lost forever – many of which, while I’d be able to replace materialistically, would never be the same.  So many of the random, seemingly insignificant things I’ve accumulated over the years hold such emotional ties that merely replacing the objects themselves wouldn’t ever begin to come close to being whole again.

In the Peace Corps, we assembled these special socks.  They held everything we’d need if an immediate evacuation was required.  And by immediate, I mean drop what you’re doing and leave.  Not even now, but now now.  No time for packing, no time for saying good bye.  These socks held a supply of medication, passports and money – the barest of bare essentials.  And while I don’t advocate for such an extreme packing plan – the American Midwest certainly isn’t East Africa – there’s something (paranoid and macabre as it may be) to be said for being prepared (I was a Girl Scout, after all).

While I certainly don’t remember all of my first tornado, I’ve retained some little snippets of memory: crouching, covered by a heavy blanket, in the cubby under the stairs; standing on the deck with my father after, watching this massive, twisting tornado explode the ground as it made its way farther into the city; and a small, plastic tea cup, still clutched in my small hands after an interrupted tea party – the thing I, however inadvertently, chose to save. 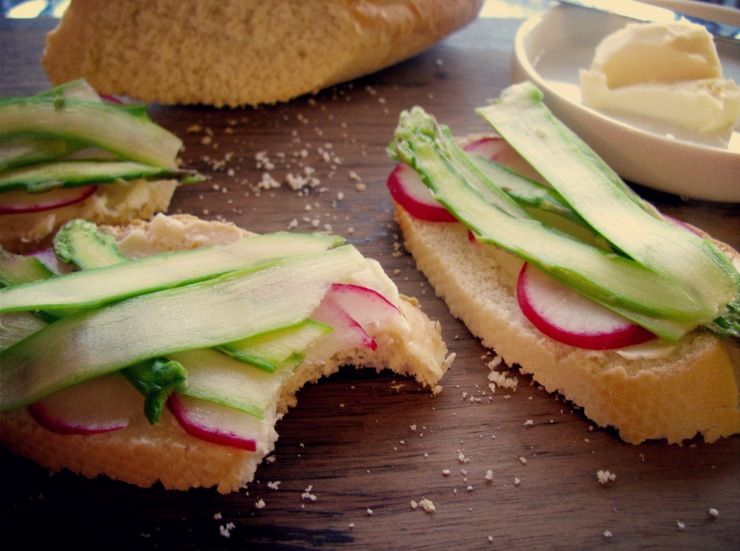 Radish and Asparagus Tartine
Serves one

Butter the baguette slices and top with radish and asparagus.  Salt and pepper as desired.